GeoModelling Solutions creates numerical models to investigate the effect of igneous intrusions in sedimentary basins on the maturity of organic matter in the vicinity.

Sill intrusions in sedimentary basins can affect potential petroleum systems by locally maturing source rocks, generating hydrocarbon pathways, and forming hydrocarbon traps. An often observed feature of sill intrusions is the formation of vent structures at the tips of the intrusions. The figure below shows an example from the Vøring Basin with sill intrusions and associated hydrothermal vents (Jamtveit et al., 2004). 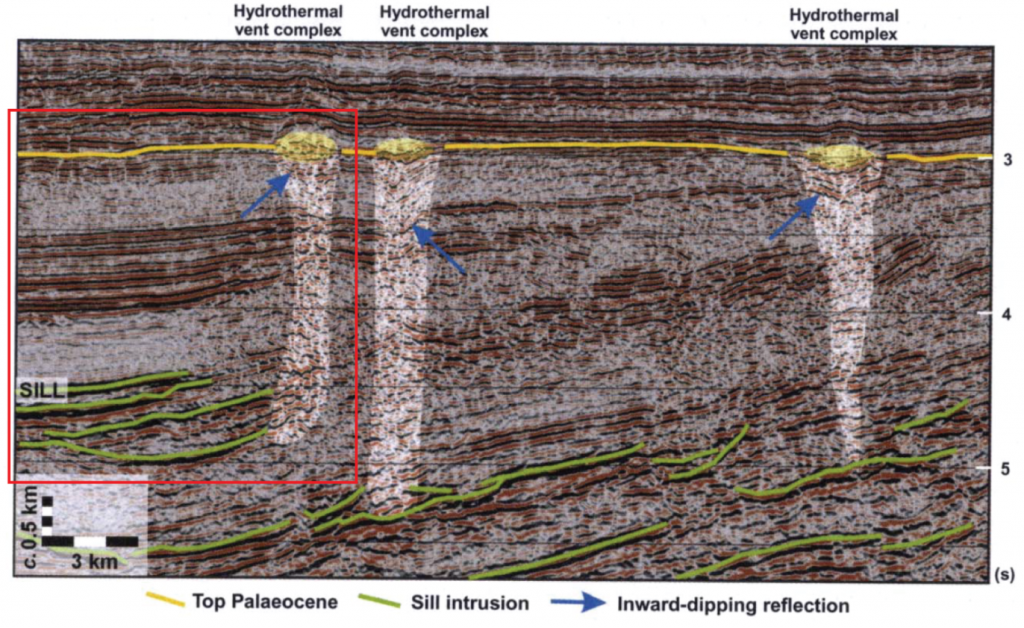 Previous numerical models have addressed the thermal impact of the sill intrusions by quantifying the effects of conduction and convection. This yielded good matches to the observed local increase in maturity and decrease in TOC and was used to compute the generated gas release. The formation of vent structures and consequences on the petroleum system was not addressed by these earlier models.

In a recent publication (Iyer et al. “Modelling hydrothermal venting in volcanic sedimentary basins: Impact on hydrocarbon maturation and paleoclimate.” Earth and Planetary Science Letters 467 (2017): 30-42.), we developed a model where we combine a temperature solver with a Darcy solver to quantify heat conduction and convection and the consequences for the source rocks surrounding the sills. We also allow for a dynamic permeability that is coupled to the fluid pressure. This leads to self-propagating fluid pathways and vent formation. The result is a model that provides better constraints on the amount of generated, transported and vented hydrocarbons. The movie below shows how the zones of high permeability (red) are driven by the intrusion of hot sills and the subsequent generation of gas that builds up pressures leading to periodic release events.